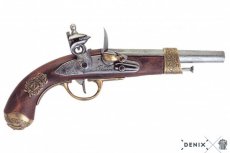 Made from wood and metal with simulating mechanism of loading and firing.

This pistol was created for Napoleon Bonaparte by his arms manufacturer Jean-Baptiste Gribeauval in St. Etienne in 1806.
This now antique replica weapon has the Emperor's badge on the handle.

Napoleon Bonaparte (1769-1821), Emperor of France between 1804 and 1815, consolidated and instituted many of the reforms of the French Revolution.
He is considered one of the greatest military geniuses in history and conqueror of the greater part of Europe.

The French Emperor was very successful in warfare, although with certain similar defeats.
His aggressive conquest wars became the largest military operations known. Until the moment in Europe, involving a number of soldiers never seen in the armies of that time.

Reenacting the Napoleonic conquests of the early 19th century with this DENIX reproduction pistol will give you best pleasure ever.

And more credit cards  depending on what Country you live in.
Worldwide with: Paypal payments as a guest or as a member.
Beside Paypal, European payments can also be paid by;
bank transfer or Internet banking  (IBAN)
Payments can be made in:
EURO | USD | GBP | AUD | CAD
JUST CHOOSE YOUR CURRENCY AT THE TOP
21% Tax included for all prices - Terms and conditions - Privacy Statement
Webshop software EasyWebshop